Now that we’re almost a half-year into the rollout of iOS 15 and Apple’s Mail Privacy Protection (MPP) – which protects user privacy by proactively loading all the images in users emails so as to reduce the utility of these pixels for tracking users and user activity – it seems like a good time to check in on the performance impacts of these changes on email sending and open rates.

When we look at overall unique email open rates, we see a consistent increase by about 12% gross percentage points for most senders, with three quarters of customers seeing at least an 8% lift and one quarter seeing 15% or more. These are material numbers for senders and not something that can simply be ignored.

So, what can you do about it?

For senders that have good response rates with clicks (or better yet, attributable conversions), simply switching to those data points is one possible way to proceed. But not every program does that. Are opens simply dead? Not yet.

While the open as a metric for measuring individual behavior or as a trigger in a workflow is now unsafe, as an aggregate take on group behavior, it remains relevant and useful. One technique is to remove all MPP opens from the data you’re measuring. Discard MPP opens from the numerator and remove deliveries that resulted in MPP opens from the denominator. You end up with a different rate, but one which is much more stable over time. Here’s how that looks since the rollout of MPP started: 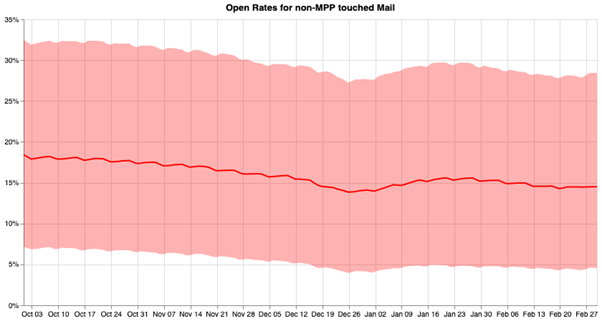 We do see a slight decline here over the measurement period (likely due to excluding so many active mobile users), but overall it is much more consistent and thus makes it a better metric to use as an indicator of positive or negative change.

As MPP adoption has leveled off, we see just over a quarter of opens overall coming from MPP on average, and for three quarters of senders it’s less than 50%. While these huge numbers explain why individual opens are no longer safe to trust, it also means that a majority of your open data is still as useful as it was before – more than enough to use for the purpose of aggregate stats. 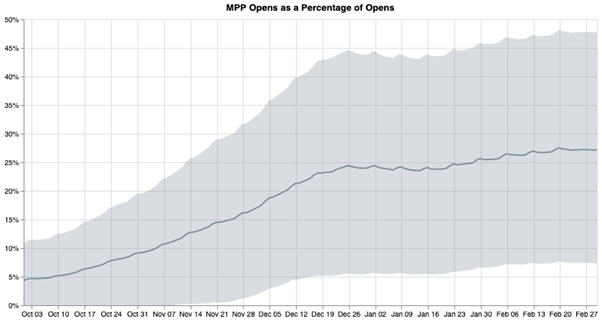 So this leaves us with the reports of the death of opens being exaggerated, though if we have additional large providers (specifically Gmail or VMG) move to pervasive pre-fetching, that should cause a reevaluation of things.

Photo by Viktor Forgacs on Unsplash

George Schlossnagle is a Co-Founder, Distinguised Engineer, and a Member of the Board at SparkPost (recently acquired by MessageBird). George has been working in email since 1999, when he and his brother began developing what would become the Momentum mail transfer-agent at OmniTI. Following the spin-out of SparkPost from OmniTI in 2008, George held the roles of CEO and CTO before moving into his current role in 2020. Through the expansive Momentum on-premises footprint and his role moving SparkPost into the cloud, George has overseen the evolution of enterprise-grade email sending and analytics over the past two decades.

George is an active participant in the global email community as well as a supporter of the Baltimore-area businesses, currently serving on the board of Circonus. George holds a patent for a method and system for adaptive delivery of digital messages. He received a BA and MA in Mathematics from Johns Hopkins University and his MS from Brown University.

In his personal time, George enjoys cooking, backpacking and spending time on his Maryland farm with his wife Pei, their two children and their many beloved animals.

More posts from author
Monday, 27 December 2021 Five data resolutions for 2022
Thursday, 09 September 2021 The future of email engagement measurement; where do we go from here?
Wednesday, 23 June 2021 What Apple's Upcoming Privacy Changes Mean For Email
Thursday, 25 March 2021 COVID-19’s Impact on Email One Year Into the Pandemic
Friday, 13 November 2020 The Trump Campaign's Unorthodox Email Tactics -- Do They Work?