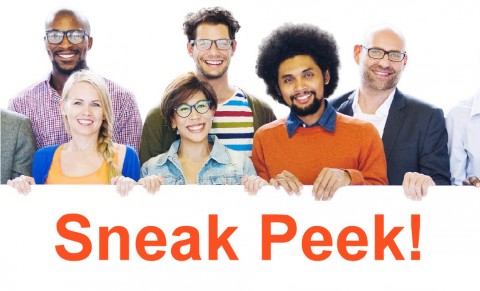 In late 2020 Only Influencers, the original community of email industry professionals, launched a survey asking members of the email industry to share information relating to the ethnic and gender diversity of their organizations. The full report was published March 2, 2021 (download it now); here’s a sneak peek…

Ethnic Diversity in the Email Industry 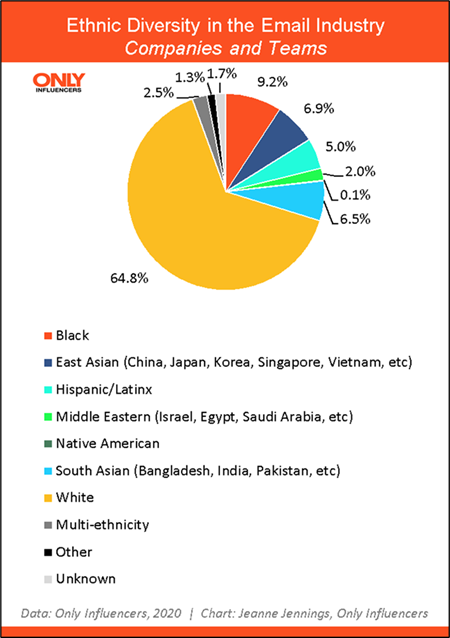 And we got our answer.

Nearly 65% of people working in the email industry are White, according to our survey findings (see the chart at the left).

The next largest groups?

See the definitions for people of East and South Asian descent in the chart.

It’s good to know the ethnic mix of the industry, but our goal was larger: to compare it to other ethnic diversity benchmarks.

In the published report, we compare our industry benchmarks to the latest Association of National Advertisers (ANA) report on Diversity in the Advertising/Marketing Industry. Arguably the email industry is a sub-set of the larger advertising and marketing industry; download the full report to see the comparison.

We also break our data down geographically and compare our largest groups, United Kingdom (U.K.) and United States (U.S.), to their latest census data. This allows us to see how the industry compares to the population of each country. How do you think the industry fared? Download the full report to find out.

In the special report, we also look at how ethnic diversity differs by company/team size. You’d be right if you said it increased as companies become larger; but at what point do White people make up less than 50% of employees? The full report will fill you in.

Finally, we did an analysis of the median diversity of the industry, as well as the average. While not dramatically differently, they do provide some additional insight into how the industry is structured with regard to diversity, and they indicate that we need to look beyond averages to really gauge how integrated the industry is at this point.

The full report doesn’t just present the results; we also offer tips and resources to help everyone increase diversity, equity, and inclusion in the industry. 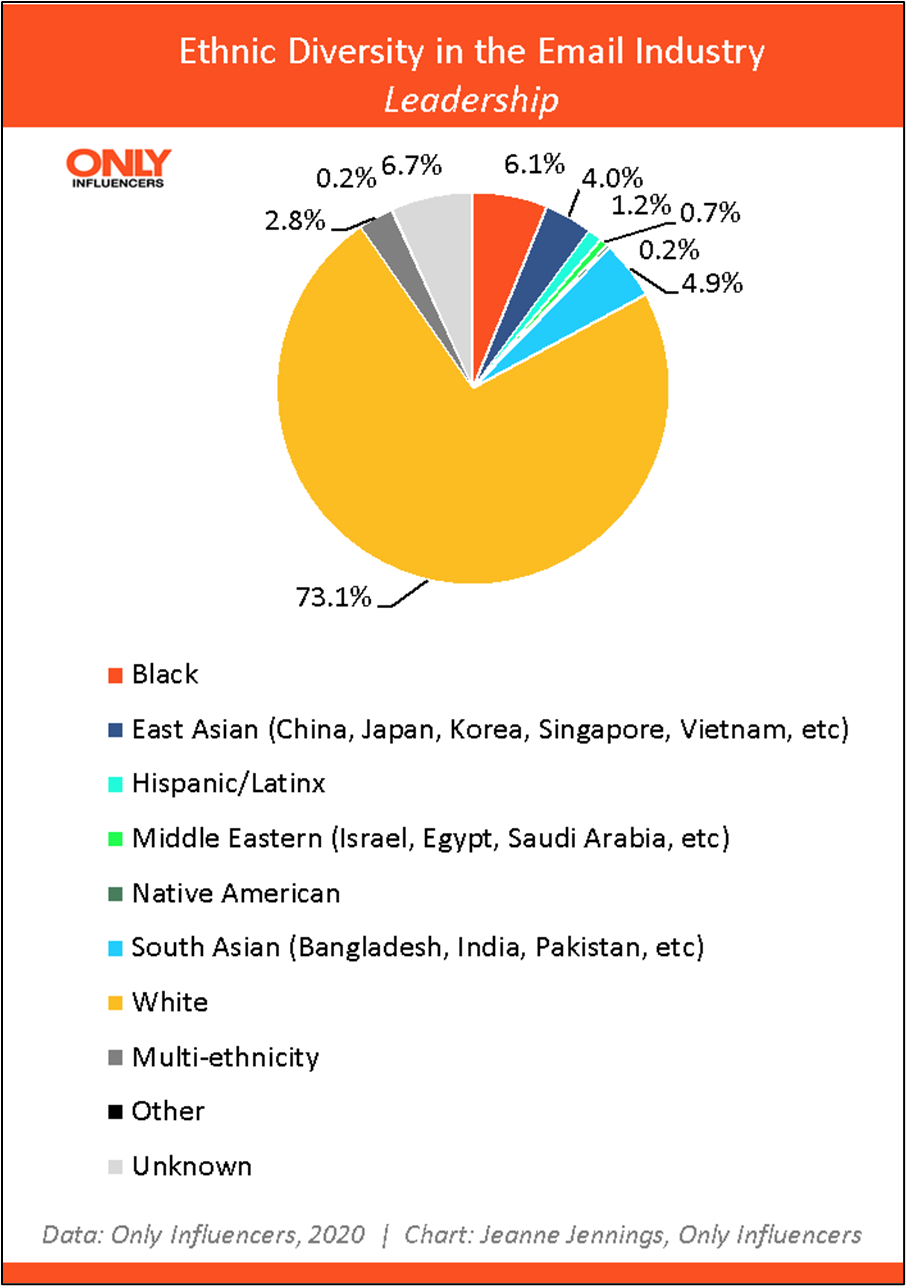 We weren’t just interested in the make-up of the industry as a whole; we wanted to get a read on the ethnic mix in leadership.

As expected, the largest ethnicity represented in leadership is White, at just over 73%.

The next largest ethnic groups in leadership did differ a bit from the largest groups in the industry as a whole (see the chart to the left):

The unknown component suggests that the people taking the survey didn’t know the ethnicity of some of their leadership team.

With the exception of White people, the largest ethnic groups were more represented in companies as a whole than in leadership positions. This suggests we have some work to do to make leadership mirror the diversity of the workforce.

As with the companies/team data, we didn’t stop here. We compare ethnic diversity in leadership to the Chief Marketing Officer (CMO) data published in the latest ANA report on Diversity in the Advertising/Marketing Industry.

Once again, we break the data down by U.K. and U.S. and compare it to the population at large. We also take a look at how ethnic diversity in leadership changes as company size increases.

And we once again took a look at the ethnic diversity in leadership median. Here we found that 42% of companies reported having no non-White representation in leadership. None. Here’s another place where the average doesn’t tell the whole story. Download the full report to get the details. 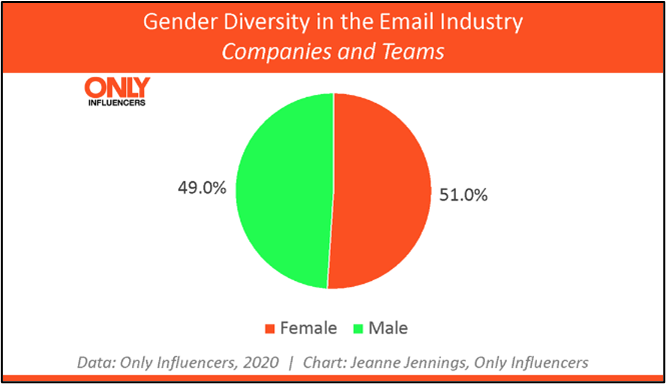 Our survey also asked about gender diversity. Here we found that while there’s an almost 50% - 50% split in the industry as a whole, that’s not the case with leadership. Watch the webinar or read the report for details.

We also look at the data medians, which again show that the average doesn’t tell the whole story. Get all the details in the full report.

Additional Information on Diversity in the Email Industry

The Only Influencer 2021 Benchmark Report: Diversity in the Email Industry also covers diversity policies in the email industry. Which do you think are more prevalent:

Check out the full report to find out; we also share how company size impacts whether or not these policies are in place.

We also offer some of the thoughts on diversity expressed by those who took our survey. People were very open; comments include:

“It’s a meritocracy. There are people of all races and genders.”

“We have much more gender and age diversity than ethnic diversity.”

“We have work to do but our leadership has recognized that this is a problem. We now have company KPIs on changing course.”

“Even though this organization prides itself on diversity and LGBTQ efforts, it has issues with retaining diverse employees, especially black women and men.”

Once again, be sure to download the report to get a feel for how organizations in the email industry are feeling about and addressing diversity challenges.

Finally, the report provides advice and resources to increase diversity, equity, and inclusion in the email industry.

Our Commitment to Diversity within Only Influencers

I hope you can join us for the Webinar on March 2, 2021 – and here’s one more reason. We’re going to talk about what we’re doing to increase diversity within the Only Influencers community. This information is strictly in the Webinar deck – it doesn’t appear in the special report.

I hope to see you there! 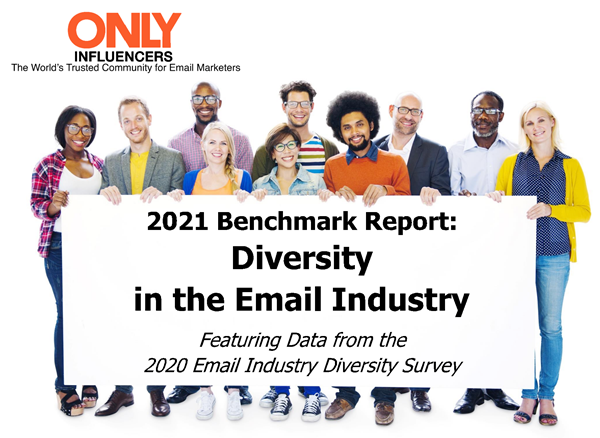 Progress Toward our Goal: Racial Diversity in the Email Industry, United States